Working on All Saints Day Party for our homeschool group 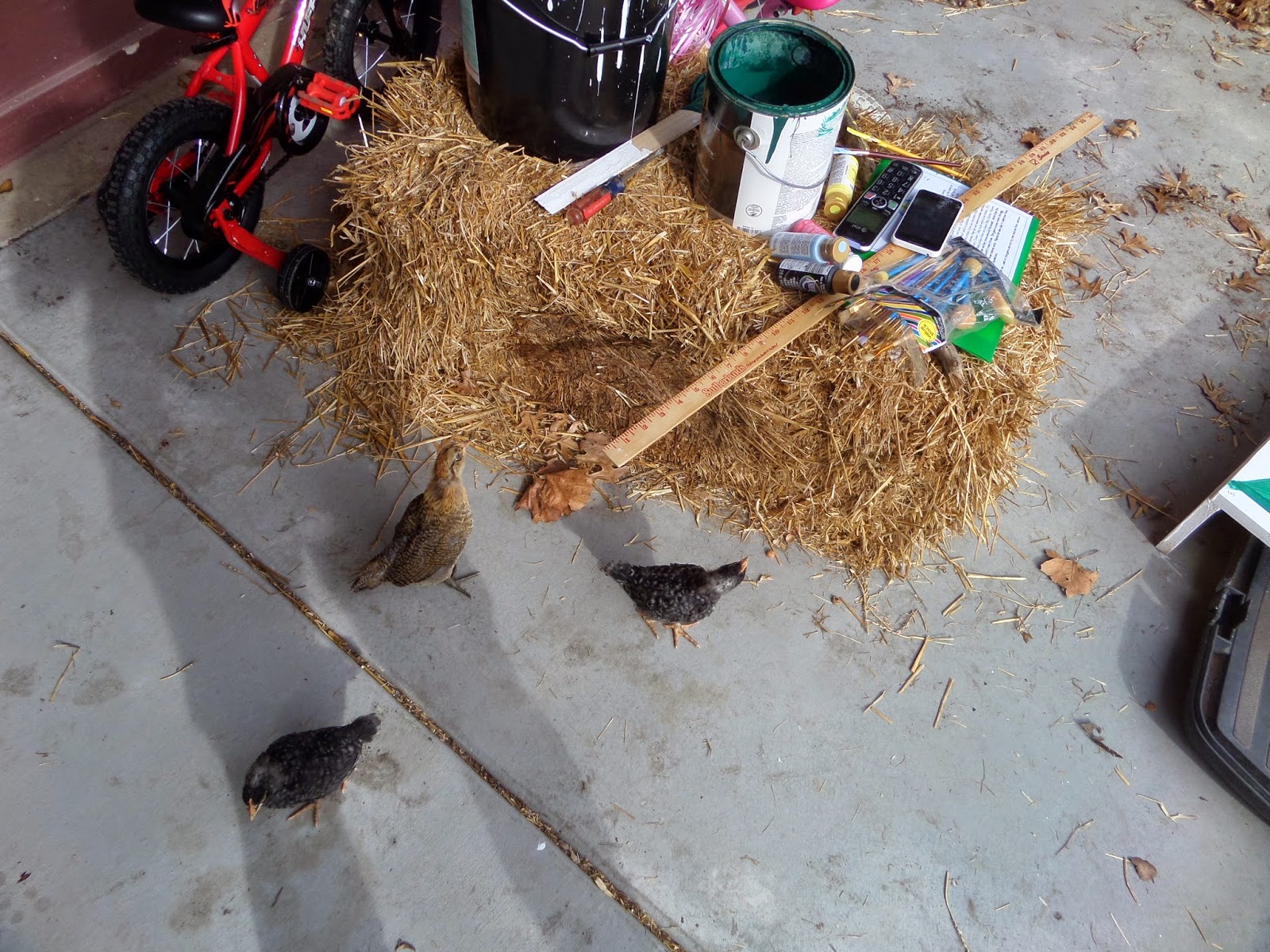 At the end of September was asked to head up our homeschool group's All Saints Day party. I had already planned to contribute and bring some games, one being our St. Peter's Fishing Pond from last year, and this new one, Trinitas (Trinity Toss) Bean bags (my husband made both). But since I was now heading it up, we added a cake walk, and a Halo Toss (pop toss with halos). So needless to say, I have been harassing my dad to help since poor Brad was busy constructing my chicken's coop, now he's painting our house ;)  The other games that are going to be used at the party are being created by other parents who have agreed to volunteer. I can't wait to see what they have come up with! 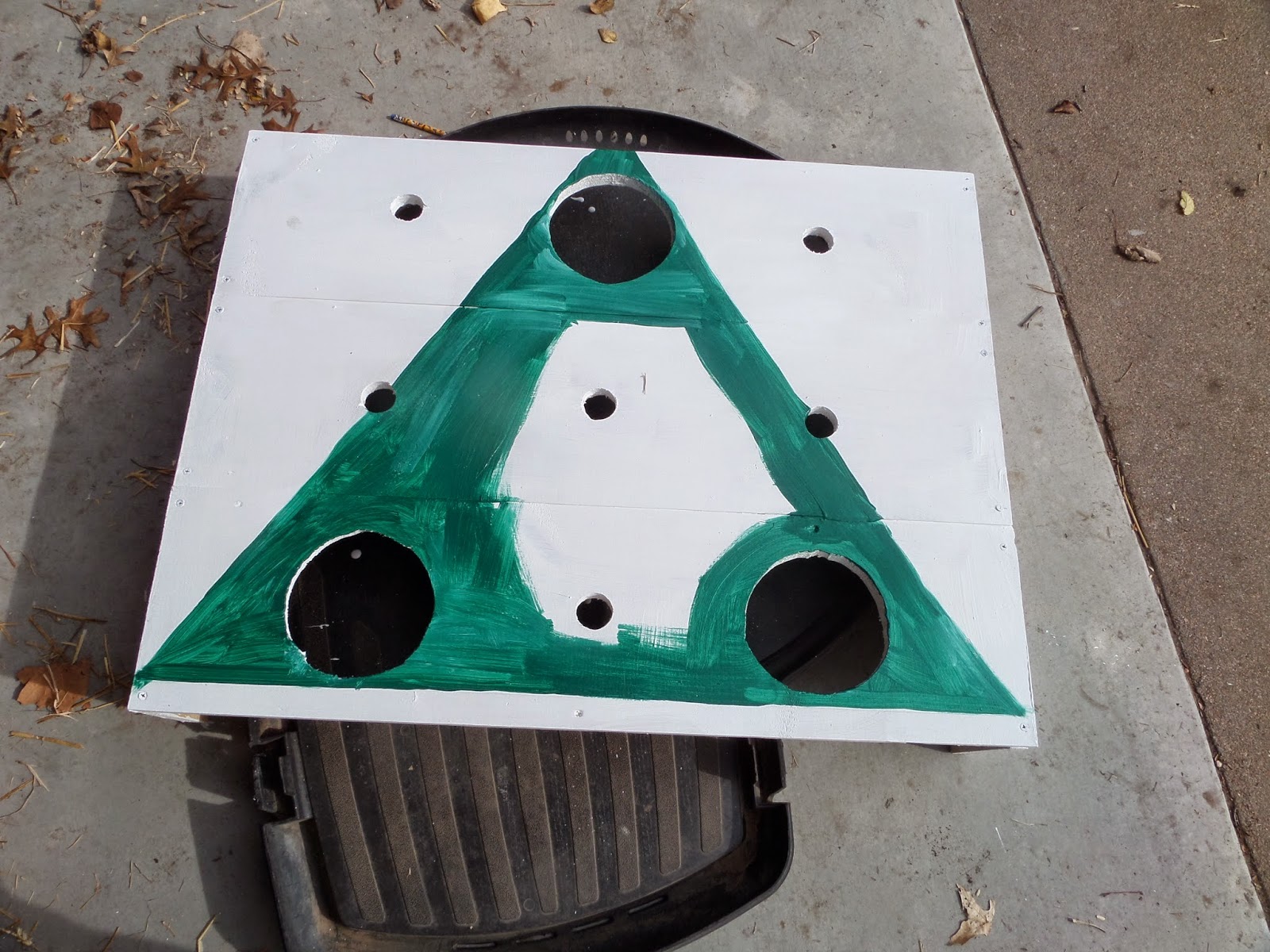 Before I started it was just raw brown wood. (At first he thought I wanted washer size holes, so he started making those, so I had to re-explain. But no need to waste the wood, the little holes will be for a washers game some other day we will work on that) 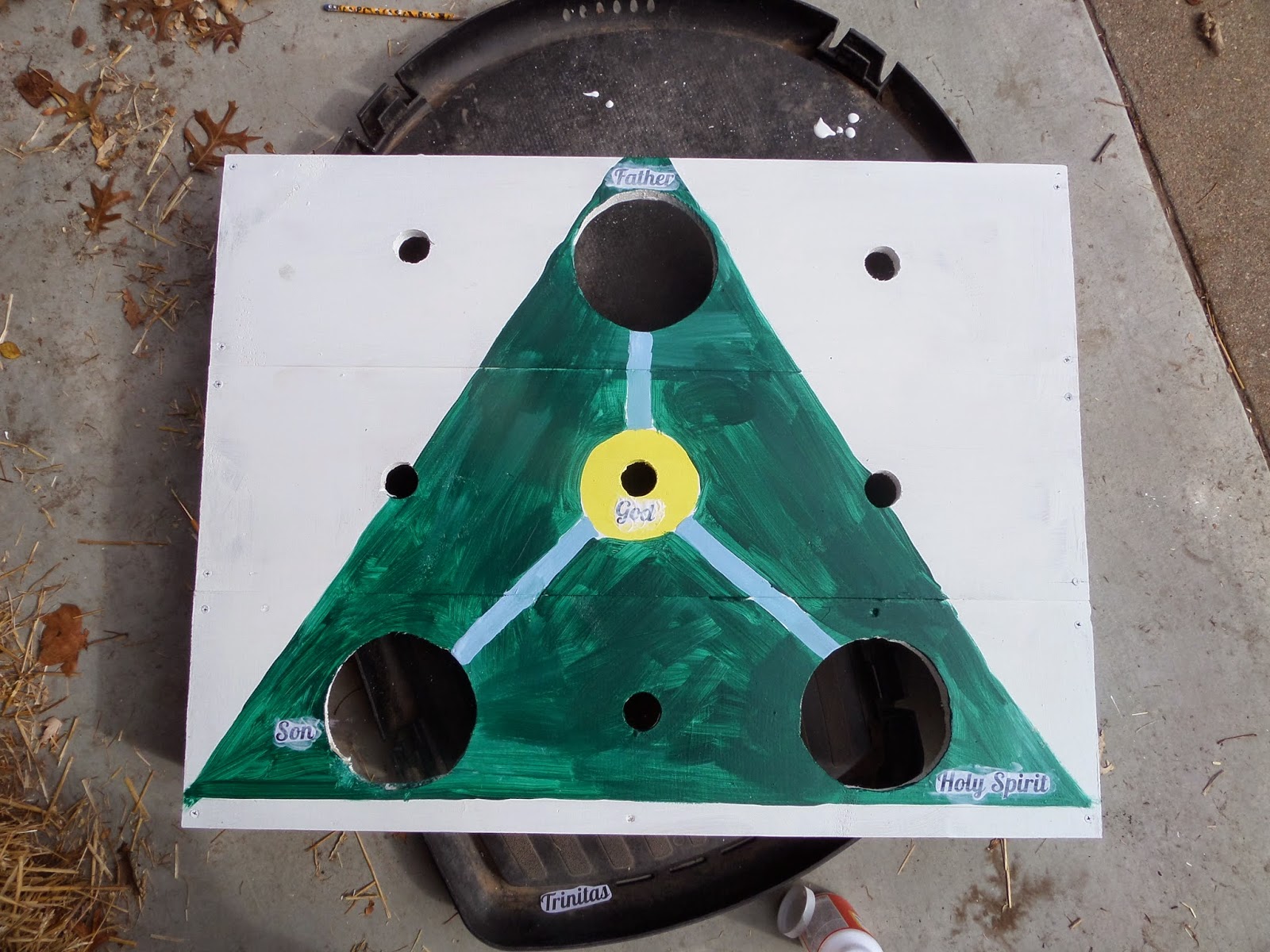 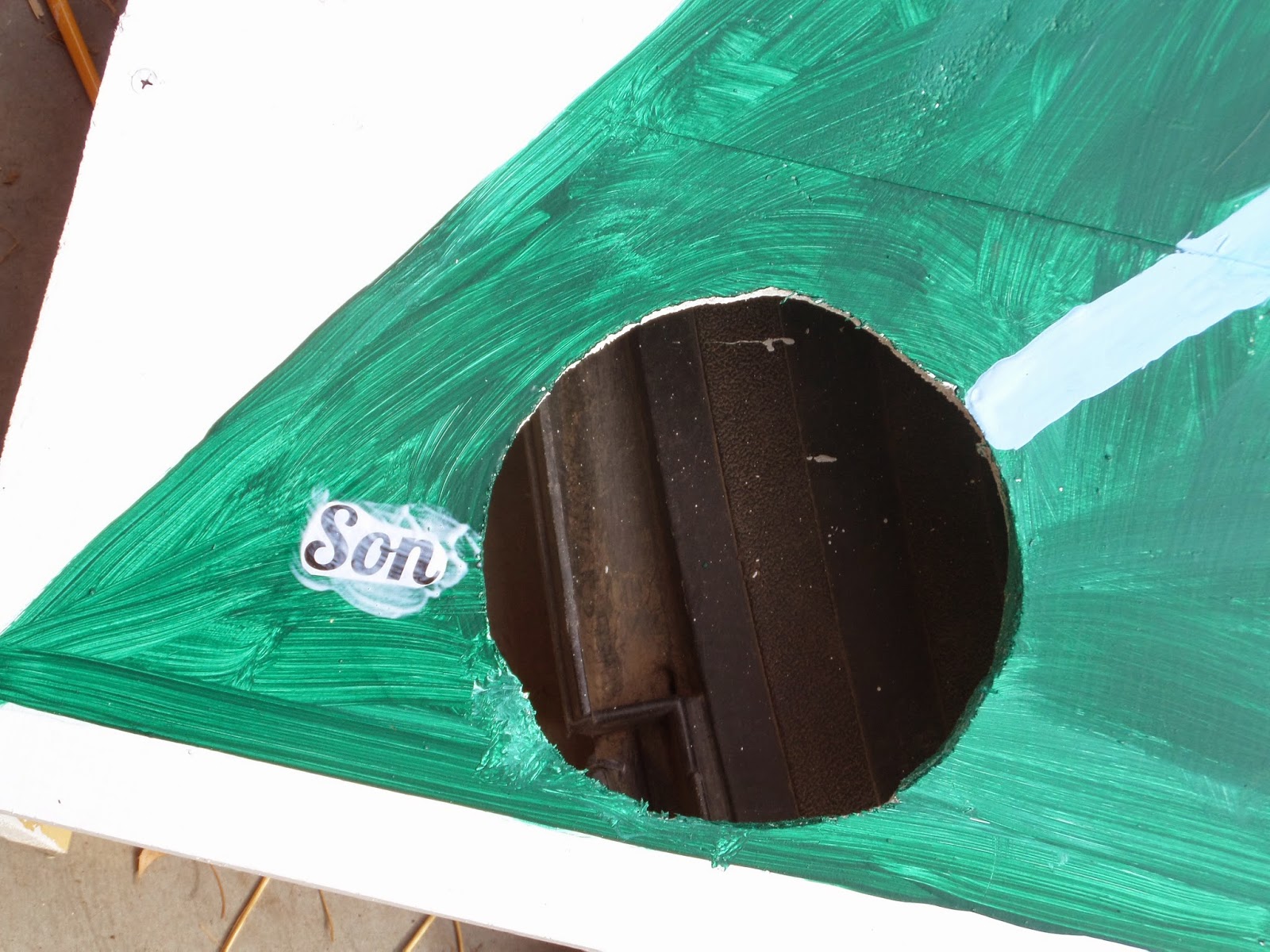 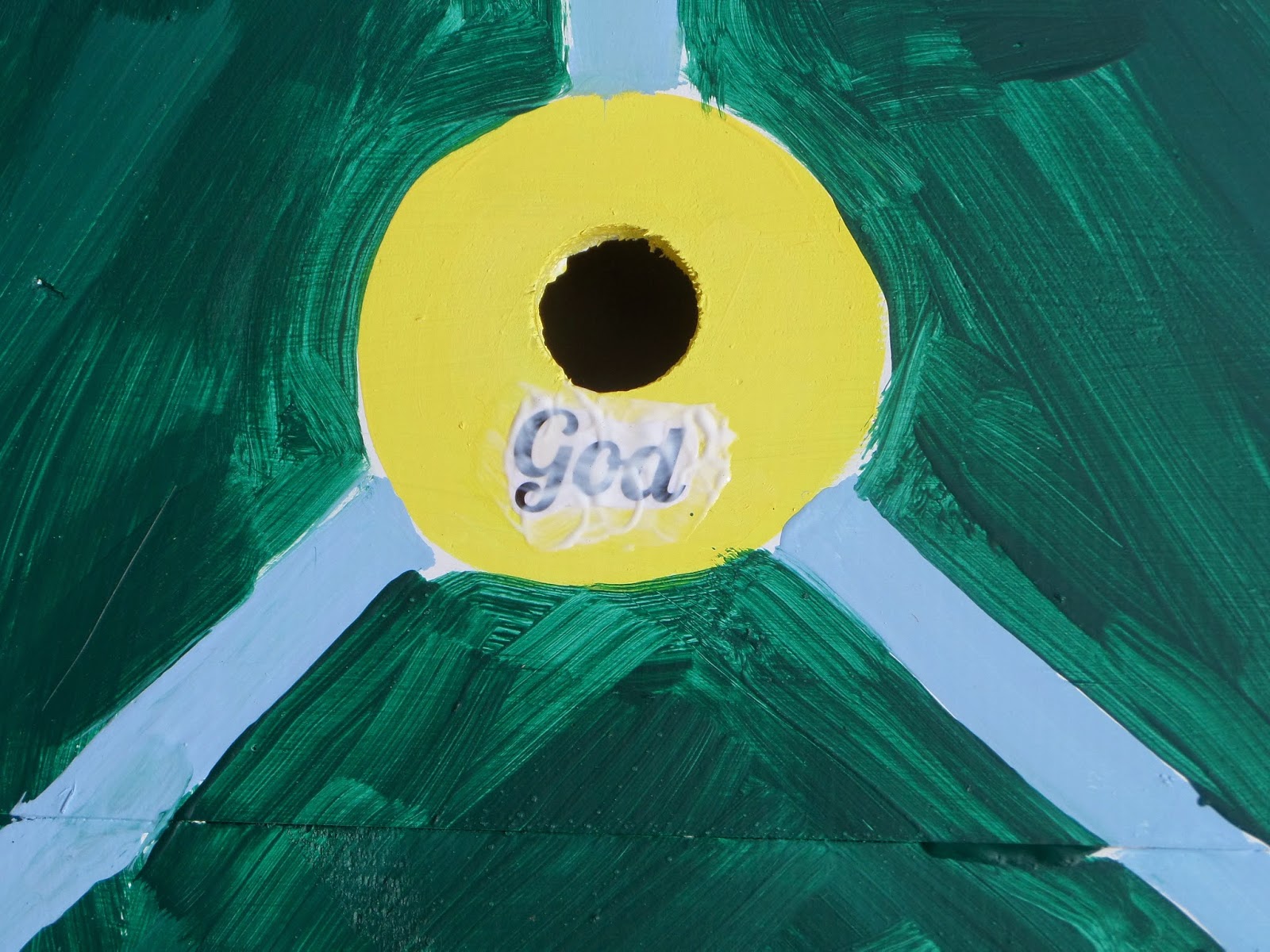 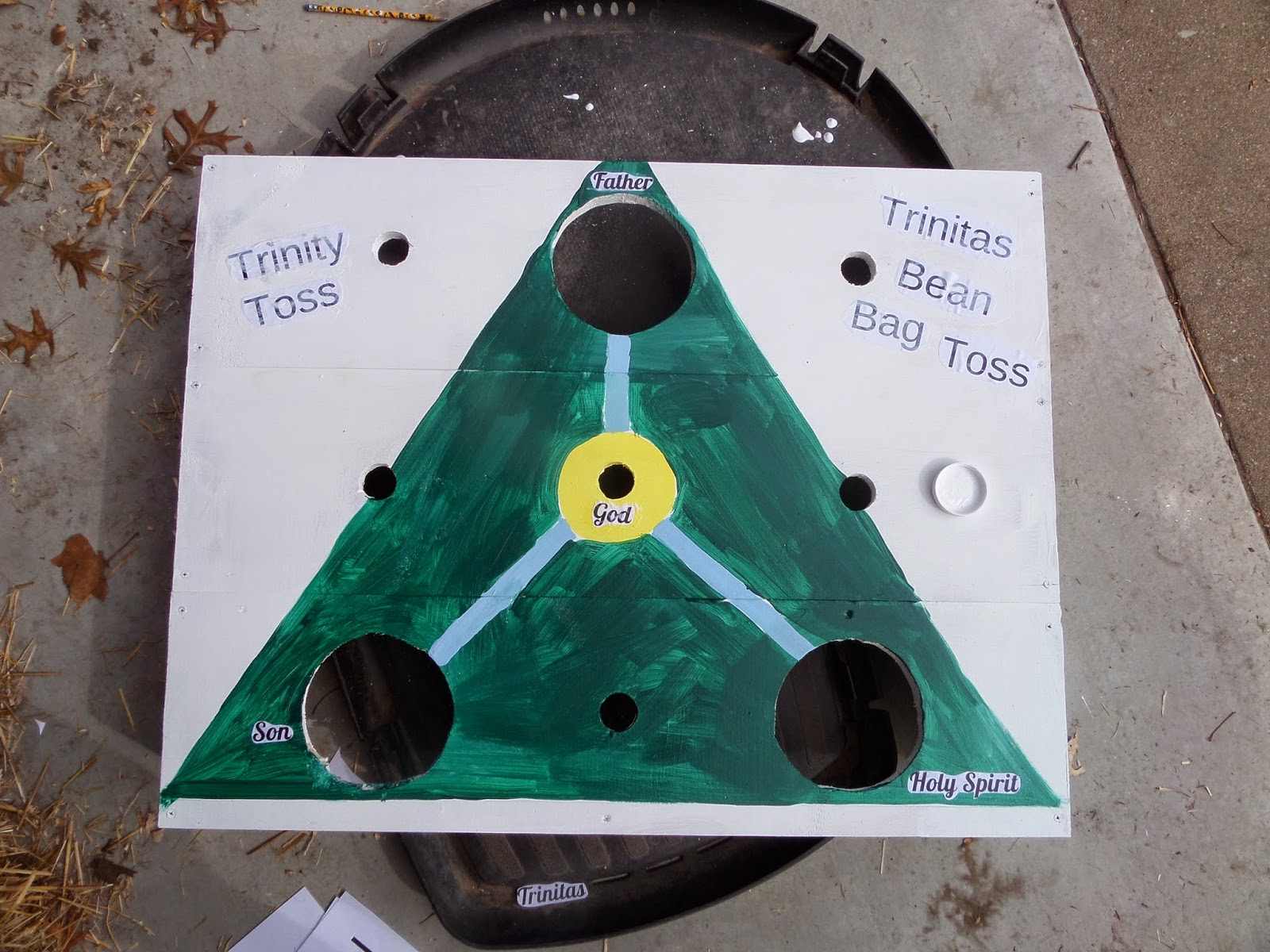 Today I put a black pin strip around the green triangle. Each kid gets to toss 3 bean bags, and then you win a prize if you get one in. I found some awesome prizes on Autom's website..I love Autom.

Check out this cute Our Lady of Grace Tray puzzle for $.39!

My cake walk saints for the Angel Food Cake Walk- they are printables from Catholic Icing. Absolutely adorable to cut out! 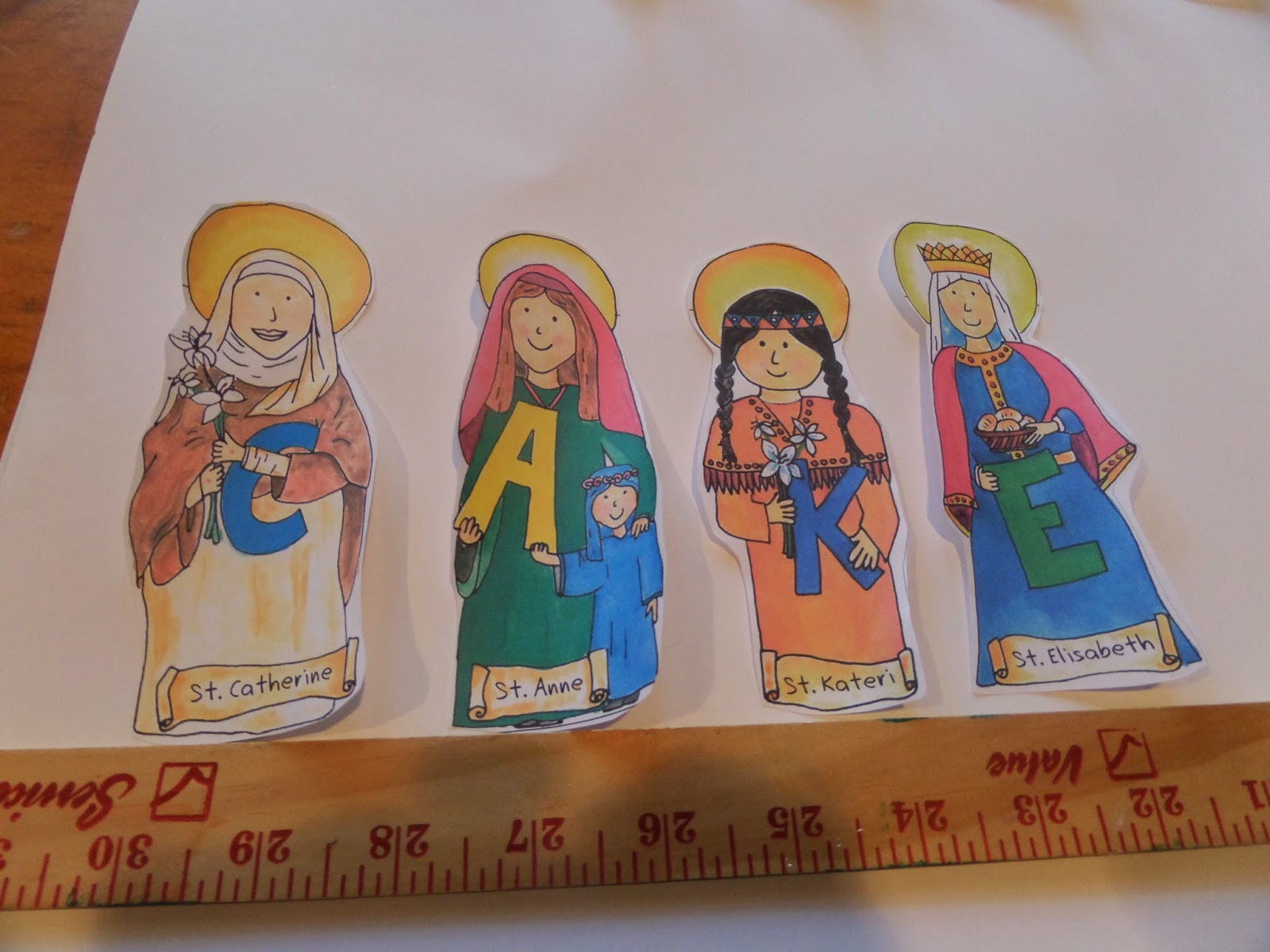 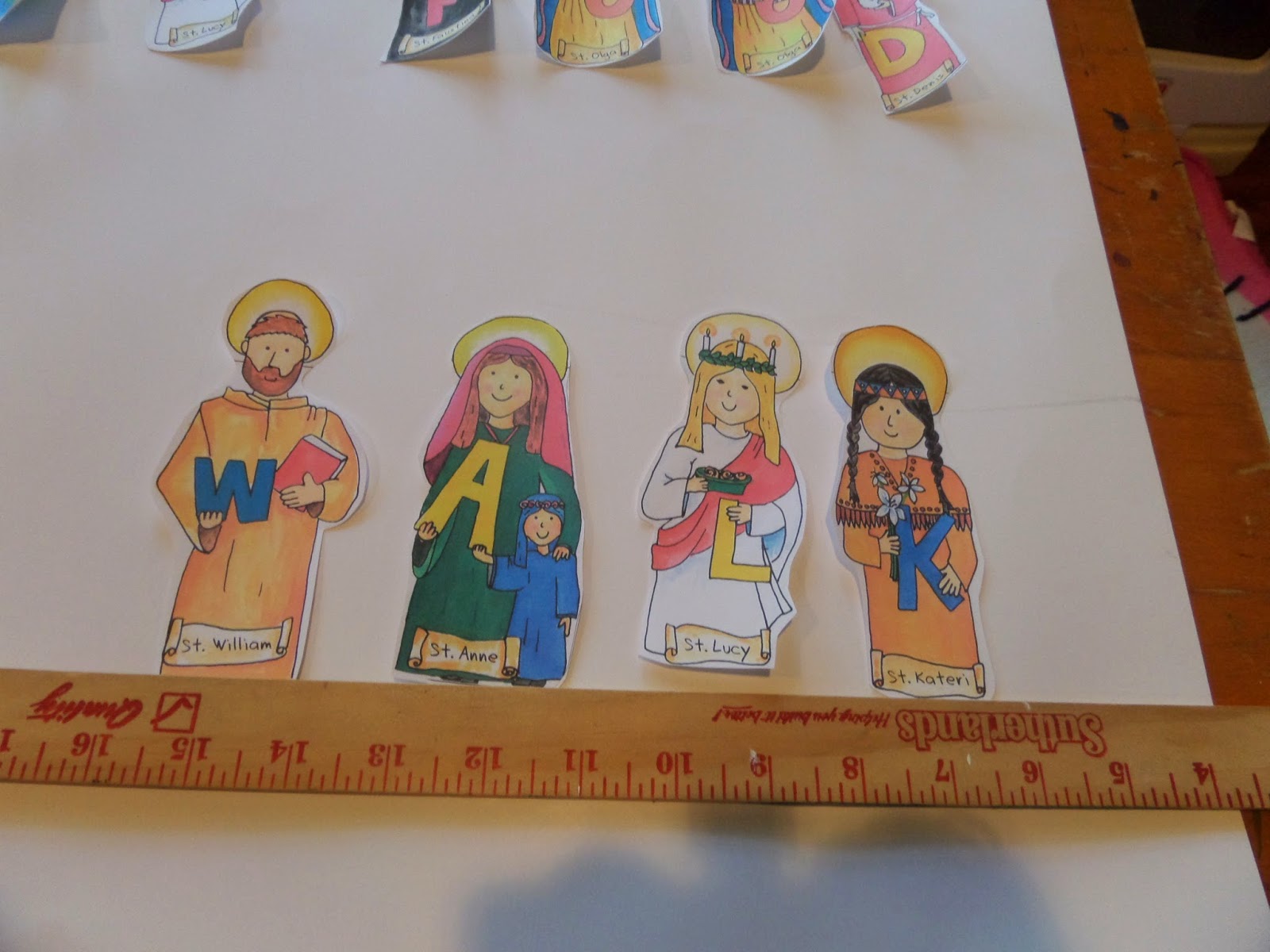 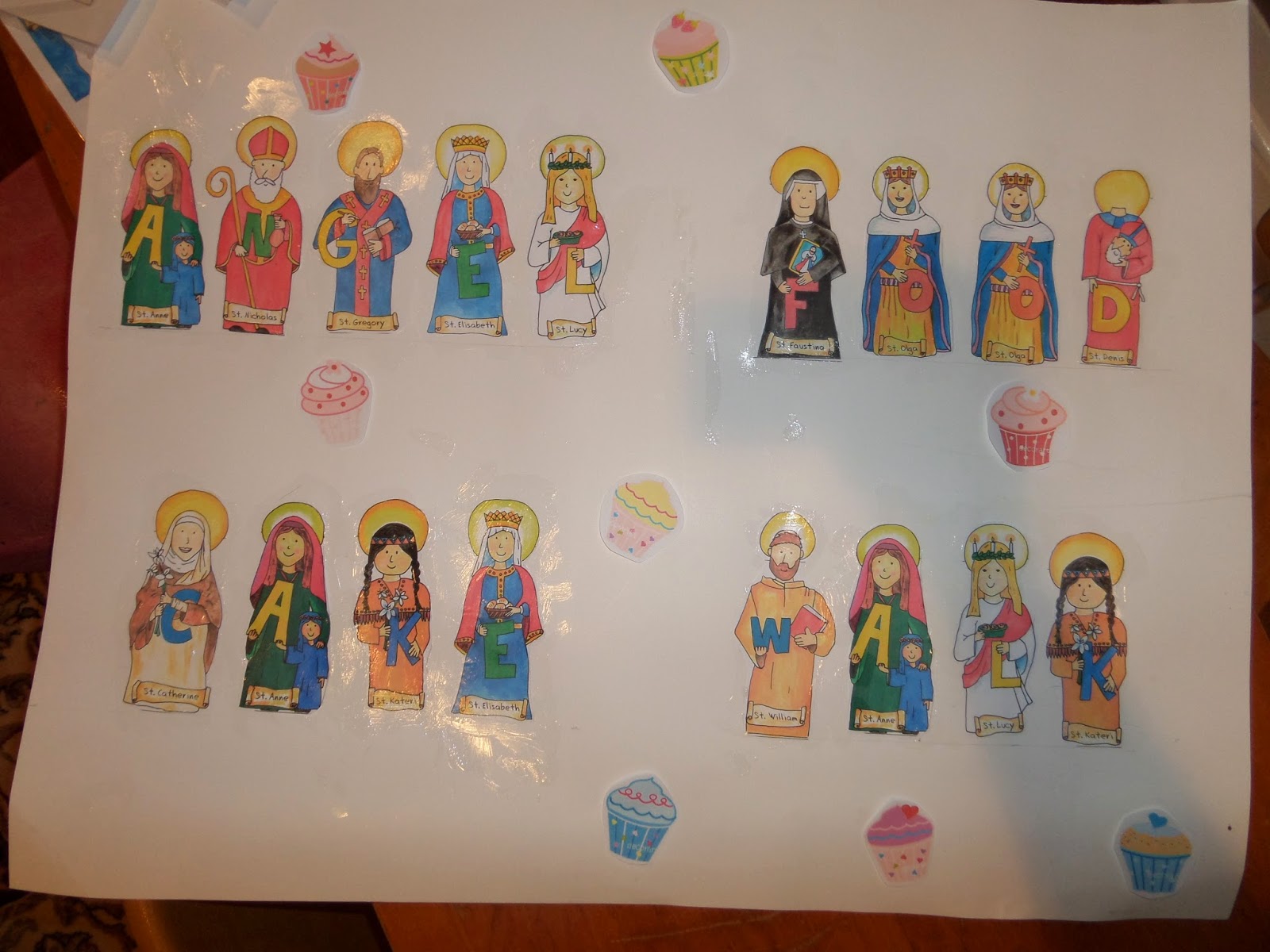 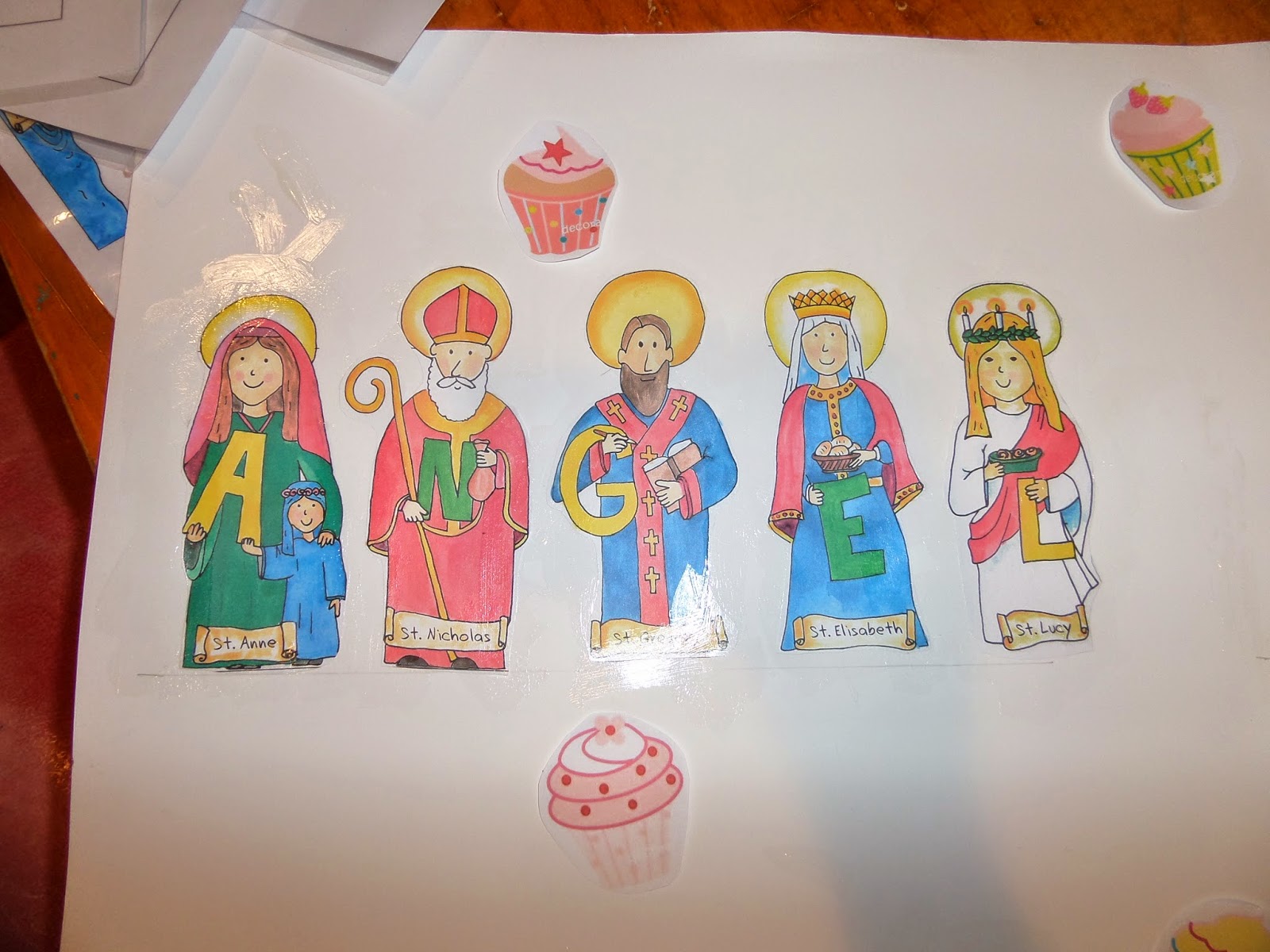 "Angel Food Cake Walk"  I think the next time I make the sign I will enlarge the printing options on the printer to make the letters bigger.

The way the cake walk will work is there will be a set number of Saints laid out on the floor. I laminated the same Saints and made large cards out of them basically. When the music ("When the Saints go Marching In") starts people march around the circle of Saints and when the music stops the people stop on a Saint. The game volunteer then spins the Saint wheel and whichever Saint it stops on determines the winner.   The winner gets to pick a cake or other delicious treat.

(cards are to the left on the table) 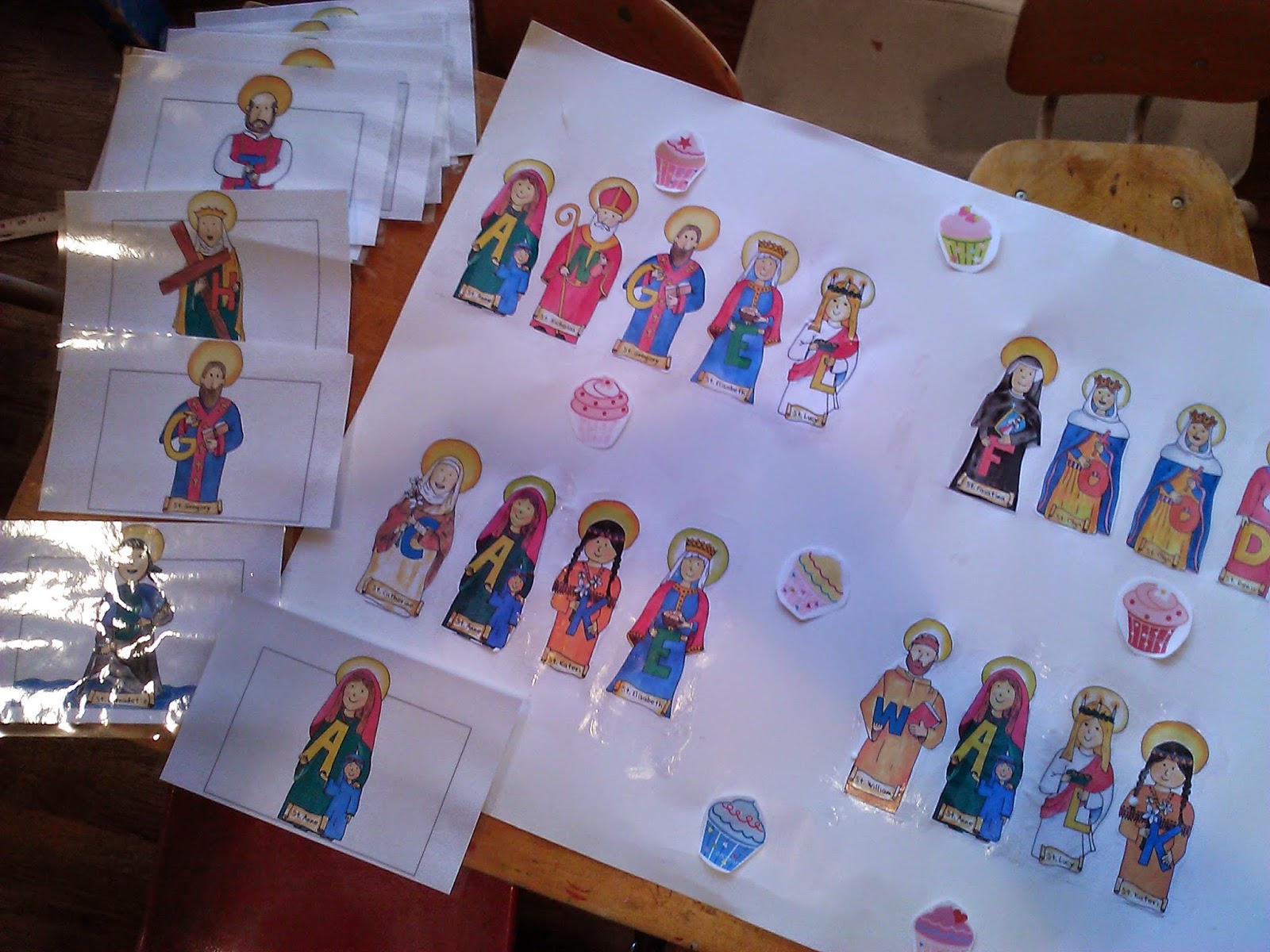 So I think since our group is a smaller group we are going to play with 12 saints, I am going to only put 12 nails into the board you see pictured below so the spinner can only stop on one of those 12 saints. Otherwise the whole 26 letter alphabet would have to be filled and we do not a need for a game that big this year. I put all 26 Saints on there though so as our party grows we can make the cake walk bigger.

I shrunk the Saints down in the printer options to a 4x6 card size. That worked perfect. Then I modge podged them. The wood circle was orginally cut out by my dad. But then he decided he didn't like it and went and bought me a table top from Bed, Bath and Beyond...lol (I am guessing something happened to it because it was a good circle that he had made) 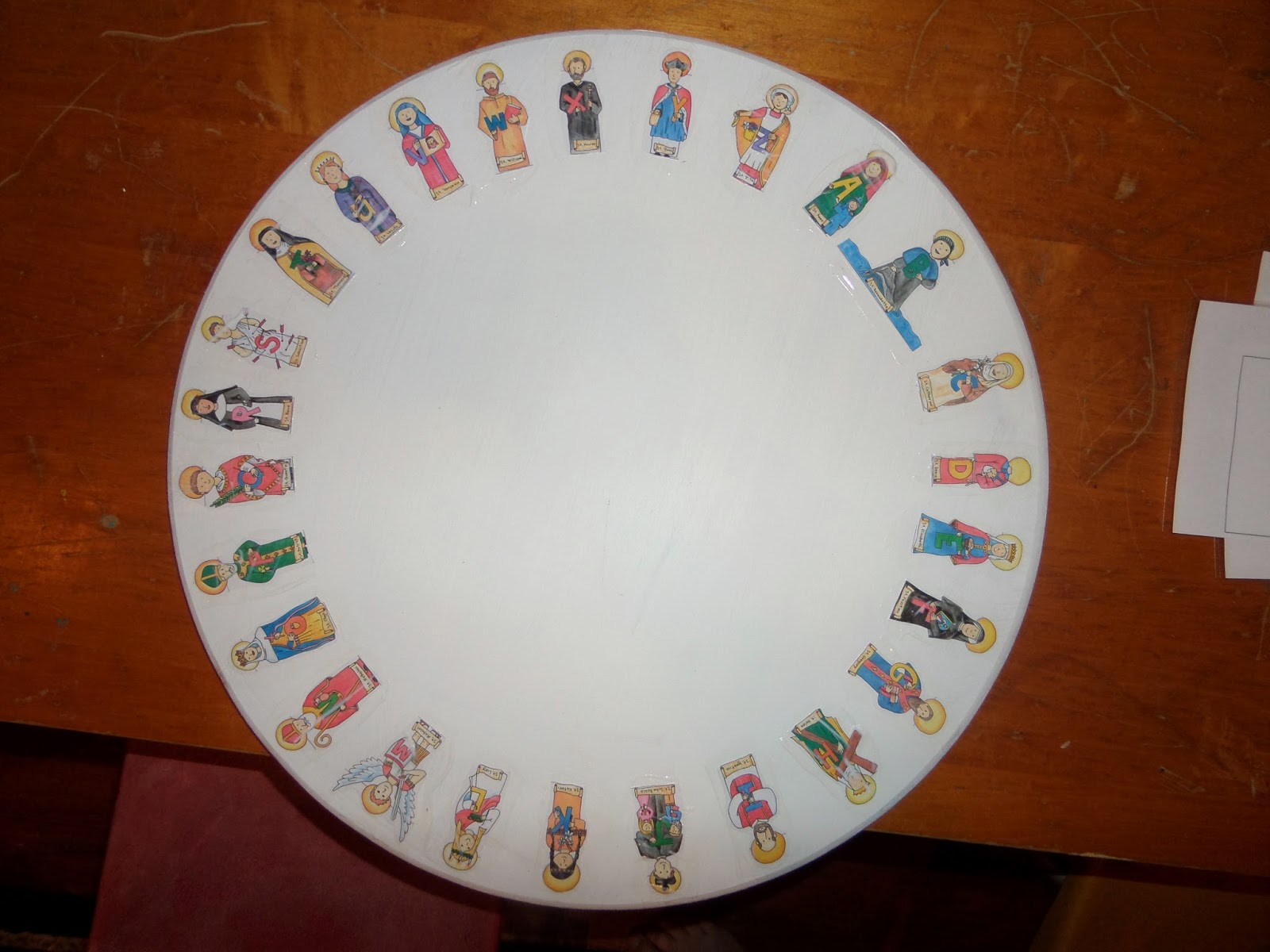 My dad was going to mount it on the pole with a lazy susan spinner thingy..lol He ended up using a long bolt and three or four washers and two nuts. (I can take specific pictures for those who are making one). I will get pictures of the finished project later this week. It's probably getting cut down a little, but it's ready to go. 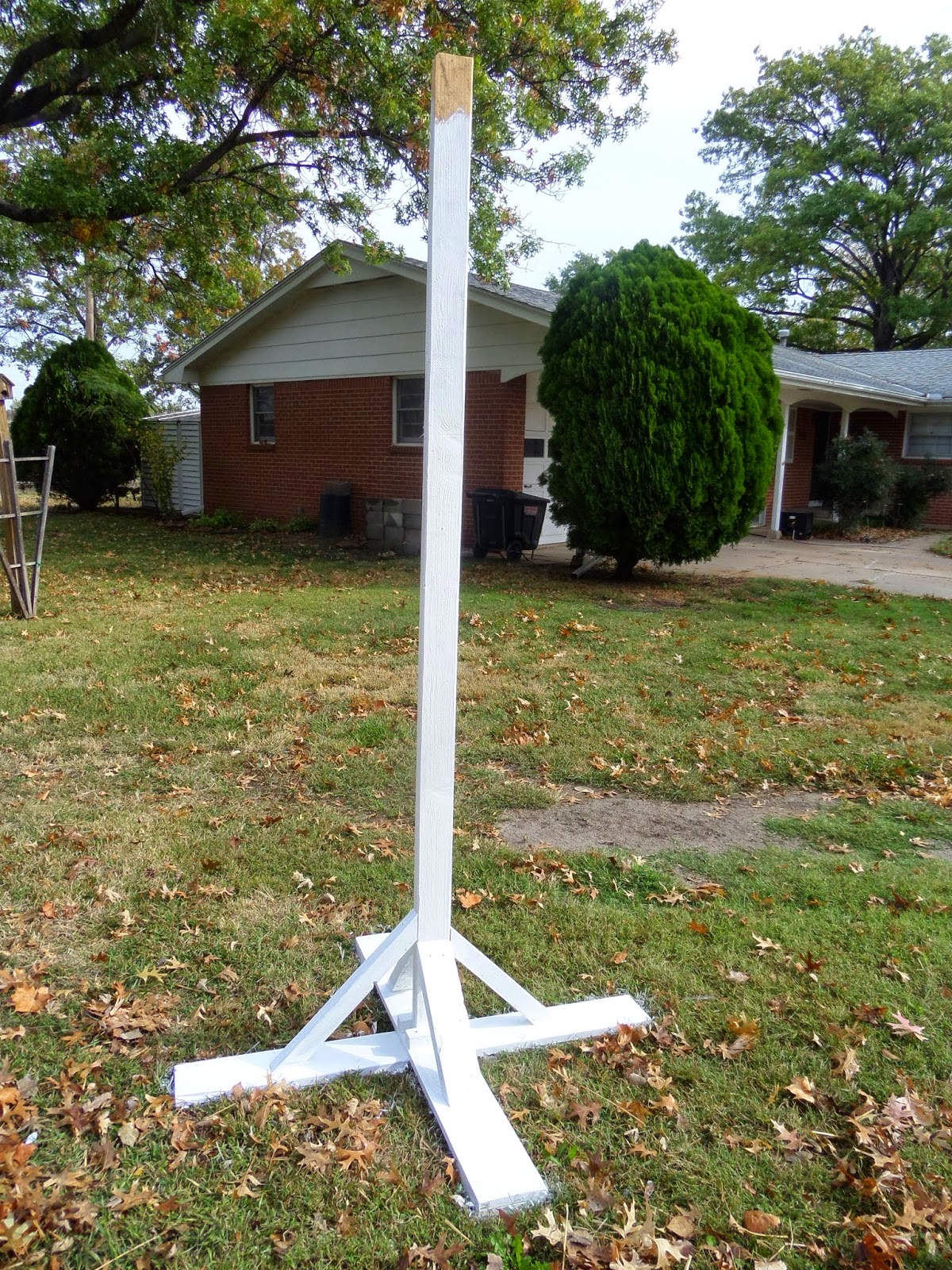 Here's the finished product's post!
Posted by Shannon at 11:08 PM

I reserve the right to delete attacks on my faith and directed at my family or friends, or for any other reason I feel they are inappropriate. Please keep this blog a respectful and happy place.

I participate in the Amazon Affiliate program. This is to better show you what I have found that works for our family (I try to provide links to things I want you to see maybe due to a lower price it won't just be Amazon) If you end up purchasing a product through an Amazon link on my page Amazon gives me a small commission from their profit. Thank you if you do! Oh if you want know how much it actually made me in the last two years, I think I earned $14 ;)

© Homeschooling Papist 2013All Rights ReservedNo part of this website or any of its contents may be reproduced, copied, modified or adapted, without the prior written consent of the author, unless otherwise indicated for stand-alone materials.You may share this website by any of the following means:1. Using any of the share icons at the bottom of each page (Google Mail, Blogger, Twitter, Facebook, GoogleBuzz);2. Providing a back-link or the URL of the content you wish to disseminate; and3. You may quote extracts from the website with attribution to http://homeschoolingpapist.blogspot.com/For any other mode of sharing, please contact the author at the email below. shannonfisher1@cox.netCommercial use and distribution of the contents of the website is not allowed without express and prior written consent of the author.

My name is Shannon. I am Roman Catholic, located in Wichita, KS, area. Thanks for stopping by!